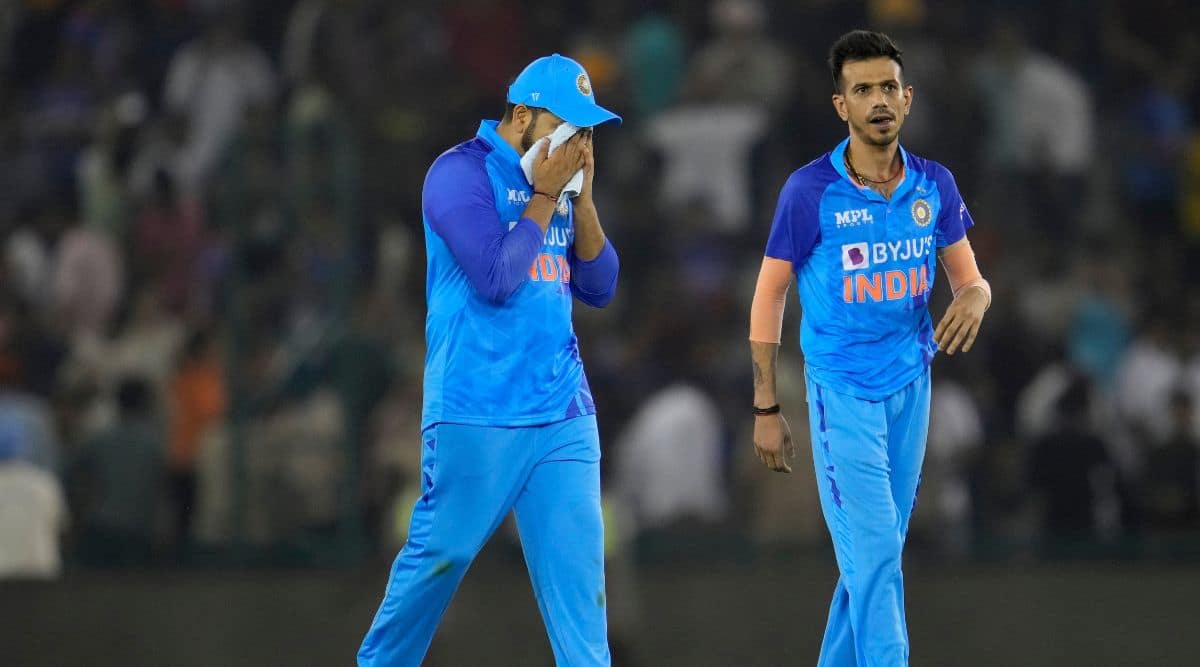 What does Yuzvendra Chahal do when conditions don’t help? Why does he get hit for runs?

There was a moment in the game when Yuzvendra Chahal winced and wore the look of a man who had a desperate run but just missed the last night bus and stood there inhaling the fumes of the departing vehicle. The frustration at what just transpired and the helpless-annoyance at the uncertain immediate future, cascading together. It was when the tall Cameron Green, who on his second ball of the chase had already triggered a funny bulging-eyes meme from Virat Kohli, slapped Chahal for two sixes in the middle overs. Two heaved slog sweeps that Hansie Cronje would have been proud of.

This isn’t a lament about Chahal or even if Ravi Bishnoi could have been picked instead, but an attempt to understand what he does when things are loaded against him. There wasn’t any spin on offer, grass was dewy, boundaries were short – the things that can be said in his defence. Plus of course that great hope about how Australian boundaries, where the T20 world cup will be played, will be longer. And that as Adam Zampa has shown, and even Chahal in a few games in the distant past, that some Australian tracks do help a bit of turn and more bounce to beat the big swings. But that’s just a spin for now. Let’s return to his bowling.

When there is no real turn and drift, he tends to do two things: the front-of-the-hand full ball on middle and even middle and leg (both of which incidentally were thrown back from midwicket stands last night), and the ball well outside off stump. These two deliveries, he usually uses as punctuation marks in his line of leg breaks on pitches which aid turn. But on such Mohali-like featherbeds, he turns to them more often.

Last night, he didn’t even use the well-outside-off chaser, that often. Without the turn, against tall batsmen, it can be a risk. The long limbs just reach out for the big scythe over the off side. So, he went for the front-of-the-hand stuff.

The line of that delivery on such belters needs to be perhaps reassessed by him. It can’t be on the leg-and-middle when the batsman like Greene can unfurl the sweeps on demand, as he did on a deteriorating track in Galle against Sri Lankan spinners in a Test this June for a sparkling 77. The thought is understandable: what if he misses, this ball will hopefully skid on and trap him lbw. And contrary to perception, the slog sweeps are not that easy when the line is on middle and leg as the front leg can get in the way. But Greene has shown in the past too that he has got the sweep technique pretty well for a tall guy. And he can belt that ball on the entire arc on the leg side when set. It’s a line to bowl to him, even targeting his sweep, if the ball is spinning. And unfortunately for Chahal, the ball didn’t even skid on as much as he expected.

So he was in a quandary, almost visible and reflected in those looks at Dinesh Karthik, the wicketkeeper, who rightly shouted out that the line of thought was good. It was, but such is the cruel nature of the T20 that a bowler tries it for 2-3 balls and is at risk of giving away the momentum with a couple of monstrous hits. As it happened on Tuesday night with Greene.

So what if he bowls the front-of-hand skidders on the off stump line. There is no guarantee that Greene would still be going for the sweep, he might just wallop it to the straight boundary or go for his elaborate reverse sweep that he tries in nearly every game these days. The hope is that the slog sweep decision is made pretty early in the piece that he gets foxed by the change in line. See, the difficulty? There is always ‘hope’ and ‘luck’ involved in these moves; Chahal understands it alright (an observation based on a couple of lengthy chats with him in the past), the fans will have to, too.

Axar Patel, with his left-arm tweakers, always stood a better chance with Greene. Where Chahal has to make a concerted effort to push through the ball, which without turn still falls in the umbrella of ‘floaters’, Axar can get the pace naturally even when trying to get it to somewhat grip the surface and get it to turn just a bit. And so he did that with the wicket ball to Greene. Until then, more or less, he skidded them in towards the middle stump, neatly from a length, angle, and pace that didn’t allow even the tall Greene to get under them. For his part, Greene will have to adjust against Axar; will he start shuffling to off a touch or go the other way to work the angles?

That wicket ball was outside off and broke away a bit, and in his eagerness to slug it over long-on, Greene had to drag it, couldn’t get the distance and holed out.

Now would that dismissal give confidence to Chahal to try his chasers outside off? Perhaps, the Nagpur track might be different and he can slip into his usual skill-sets easily. The thing is the chasers work best when aligned with his side-spun leg breaks, googlies, and sliders on the stumps; or at least when there is turn. That’s the handicap he faces. It will need a real strong mind to stop thinking of what-if worse scenarios and try them out regardless.

“Those who have doubts in them, na, he uses that leg-and-middle line,” once observed Narendra Hirwani to this newspaper. Doubts lead to stuttering steps as the batsmen gingerly open up the stance and prod at it unsure of the extent of venom in the ball. In his six-for at MCG in January 2019, a couple of Australians were swallowed up thus: Marcus Stoinis embarrassed and Jhye Richardson owned. But Greene is different; Mohali track was different to that day in MCG which aided turn, bounce, and a lovely drift in the air.

Drift is such a key element in Chahal’s art that he hopefully will find it in Australian evenings. It’s the thing, apart from turn and bounce, that makes the batsmen pause a vital second before they bring down their murderous bat swings. Greene didn’t have to waste his breath on it as there was no drift.

“I have always had that drift, that’s key for me,” Chahal had told this newspaper.

In that chat, a couple of years ago, when we were rewinding to the Melbourne spell and Stoinis and Richardson were brought up, Chahal piped up with the dismissal that gave him the greatest joy that night. When drift, turn, and bounce (or at least two of them) occurs, Chahal can be a tough nut to crack. (FILE)

“Voh Handscomb ka wicket dekha?” Chahal asks. Of the six, he cherished that one. It’s the moment Peter Handscomb, past his fifty and considered good against spin, ended up on a banana peel, stuttering and slipping as the ball skidded rapidly to trap him lbw.

It drifted in from well outside off-stump and swerved in towards the middle. Handscomb just about leaned forward when the drift made him stop and the left foot started to stutter out as he tried to hold balance. He did it reasonably well but the subsequent speed of the skidding ball that straightened was too much for him.

When drift, turn, and bounce (or at least two of them) occurs, Chahal can be a tough nut to crack. Without it, he is yet to crack the code. The question now is with his art can he crack it at all? Else Chahal faces the risk of being slotted as an ODI bowler in the future and taken out of T20s after the world cup. So in a way, it’s an absolutely pivotal stage of his career.

He can be so wary to try googlies without those guile-factors present as he possibly thinks batsmen will line-up and smash. Some like Bishnoi have the presence of a hustler at crease, with their angled run-ins and quick-armed googlies and sliders that can work even on less-than-kind pitches. Not that he can’t be taken apart; he was this IPL, in fact as the batsmen started to mow him to the leg side. He then started to work on his leg break and outside-off attack more. As KL Rahul said the other day, everyone in the team is a work in progress.

That in a nutshell is the Chahal conundrum. When the leg break spins and drift in the air, it’s not easy for the batsmen to keep swinging, especially with his clever variations. But when the variations become the main theme, when conditions nullify his main weapons, then the pressure is piled up on him. As tough as it is for him in the middle, for us, from the outside, it’s fascinating to watch a bowler like him try to jail-break with the decisions he makes. Even if he fails.