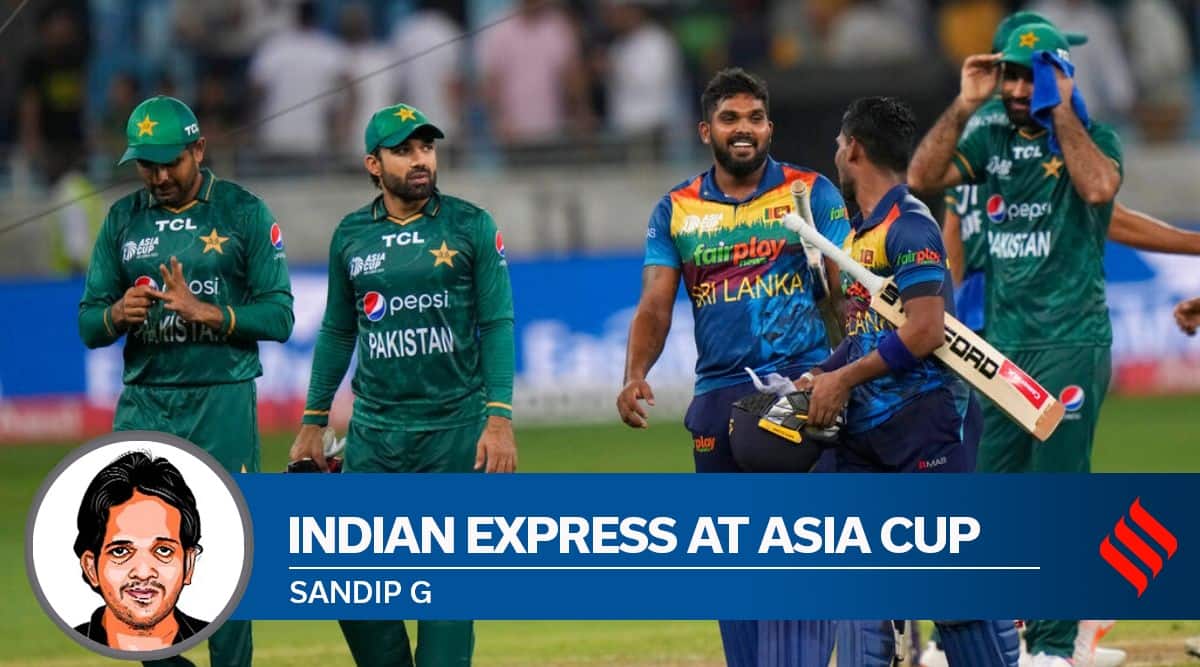 Wherever Pakistan gazed, they could see the beaming, laid-back Wanindu Hasaranga. He teased them with the ball, picking three wickets – those of Babar Azam, Khushdil Shah and Ifthikar Ahmed; he pocketed two composed catches near the boundary rope; hatched the run-out of Mohammad Nawaz with a bullet throw, and then wrapped up the chase of 122 with a four, a brace, and another four.

When he arrived at the crease, at the fall of the fifth wicket, Pathum Nissanka had soaked the tension with an unflustered 55. But the Asia Cup has witnessed bizarre collapses and brain-fades. Hasaranga ensured there was none. He is Sri Lanka’s Mr Reliable, with the ball, on the field and as a finisher. Perhaps as a leader of their attack too, always feeding inputs to the bowlers, not just spinners but seamers too.

Whenever the match seemed to slip from Sri Lanka’s grasp, there was Hasaranga. After the Powerplay choke, he strangled Pakistan. Then when they began to release pressure around the 10th over, he kept his cool to snaffle Fakhar Zaman near the deep midwicket boundary. Then he deliciously beat an onrushing Babar Azam in flight to have him bowled, ending a laborious 30 off 29 balls, before slicing through the middle order.

Not the result we wanted today 💔

We meet Sri Lanka again in the final on Sunday 🏏#AsiaCup2022 | #SLvPAK pic.twitter.com/Ajj6HwFJWR

Hasaranga had ample support from Dhananjaya de Silva and Maheesh Theekshana. The assortment of their variations confounded Pakistan’s batsmen, who were ponderous and pensive. Hasaranga would befuddle them with alterations in pace, flight, angles, trajectory and variations, namely the standard leg-break and wrong’un.
Theekshana traded in his carrom ball, reverse carrom ball and in-swinging seam-up balls. De Silva does not possess any of the specialists’ variations, but was impeccably accurate with his lengths and lines.

The seamers too offered their support, as the Pakistan innings never found any impetus. In the first five overs, they could find the rope just once. By the 10th over, they could add just three more fours to the tally. That they still maintained a run rate of seven at that point owed to the Lankan bowlers’ line-straying tendencies, conceding as many as 15 wides and 17 extras overall (the third-highest source of runs after Babar’s 30 and Nawaz’s 26). And they could muster only 121.

But two early wickets infused hopes of a low-scoring thriller like the Afghanistan versus Pakistan encounter. Off the second ball of Sri Lanka’s chase, Mohammad Hasnain extracted extra lift and bounce off a hard length to snare a nick from Kusal Mendis, who was looking to force the ball on the back-foot. An instinctive stroke, and though he tried to change the stroke, the pace of the ball denied any wriggle room. Sri Lanka were 1 for 1, before they stumbled to 2 for 2, when Haris Rauf had Danushka Gunathilaka caught behind. The ball was a staple loosener, short and wide but Gunathilaka could not control his intended upper cut, extra bounce the reason, as the Sri Lankan batsman only succeeded in stretching the sinews of the lunging Mohammad Rizwan.

Joy was back on the faces of Pakistan enthusiasts —supporters of both teams had turned up in hoards to cheer for the teams locked in nothing more than a dress rehearsal for the final. When the voice dropped, Pakistan players would urge them to ratchet up the decibels. In the middle, they doubled their intensity and hostility, Babar set aggressive fields, his bowlers sensed a kill. The Sri Lankan fans had sequestered into a shell, their voices muted, their worst fears flaring. Just then, Nissanka muscled three fours, his partner de Silva creamed a pull off Rauf. The mini counterpunch saw Sri Lanka race to 29, whereupon de Silva perished to Rauf’s thunderbolt that clocked 146 kph. He was looking to work him down the leg-side but the ball arrived too fast to spoon an easy catch.

At 29 for three, the match was again on a knife’s edge. Pakistan were going for the jugular — defending the meagre total was improbable, but bundling out Sri Lanka was possible. But Nissanka launched a rasping counterattack. With Bhanuka Rajapaksa, he re-snatched Sri Lanka’s ascendancy with a 51-run stand. Rajapaksa continued with his uninhibited ways with a couple of beefy sixes off Usman Qadir. The first was a murderous slog-sweep, the second a glorious pull when the rusty Qadir, playing his first game of the tournament, dragged one short. Nissanka made Qadir’s night all the more nightmarish when he ran down the pitch and disdained him over deep midwicket.

Sri Lanka’s plan was simple — play the dangerous Nawaz out on a sleepy surface and target Qadir. The facile target afforded them this liberty, and by this time the required run rate had dropped to below five. Though Qadir did atone with Rajapaksa’s wicket, the match drifted away from them. No time for a heist or Houdini. And without much fuss, Lanka overhauled the target with five wickets in hand. At that point too, there was that man, Hasaranga, delivering another knockout blow. This time a killer blow.